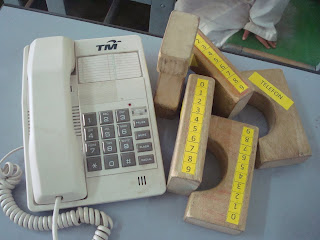 OK, first of all please don't get confuse. This entry is got nothing to do with the popular song of Lady Gaga, this entry is just about another activity that I just do with my year 1 pupils. I'm so excited to share it here. As this week is a monthly test week, so I have some extra time to prepare some simple materials to use in the year 1 class. Year 1 pupils did not involve in the monthly test yet because they still in their early months in school. 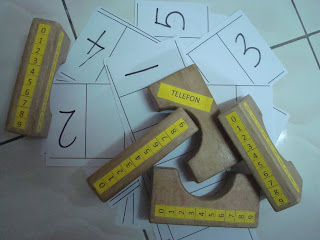 I got the idea to use the telephone in the class when I was busy shopping in TF Mall. I was looking for some biscuits to eat in my free time and suddenly I saw some cute telephone toys on the shelf. Right after that, my mind cannot stop thinking on how to use the telephone as a teaching material in my class. It will be great to use to year 1 class because the number on the phone is between 0 to 9.


So, after think, and think, and think (while busy eating the biscuits) I suddenly get an idea on how to use the telephone in my class. so I prepared fake telephones using the materials that I borrowed from the pre-school class. I just pasted numbers from 0 to 9 on it and put a label of telephone so that it will look like it. haha... 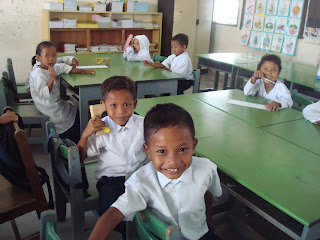 The main objective of my teaching is about addition of two numbers up to 10. I will act as a biscuit shop owner and the pupils will act as my customers. I will call them to get how many biscuits they want and add the biscuits together. I believe that this activity not only cover the addition but also good for the pupils to get the idea of the usage of the numbers. First, I divided the pupils into 5 groups. In each group, I put pupils with different abilities so that they can help each other and the activity can run smoothly. I also selected one pupil to be the group leader. 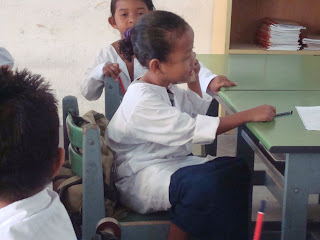 Then, I gave 2 sheets of papers to all the groups. they need to write down any 5 numbers that they like on the paper to be as their group phone number. To make it easy for me to know which group it will be, I already 1 number at the end of the paper. After they have their phone number, I collect one of the paper so that I can call them.

After that, I gave the fake telephone to the groups and put it in the middle of their table. Oh, I also have 1 telephone with me to use it in this activity to call the pupils (I borrowed the phone from my rent house). When I started to push the button I will say the number that I push loudly so that the pupils can listen and check their number. This is good for the pupils to be alert of the numbers that I said out. They will learn to stay focus and also they will need to make sure that they recognise the numbers that I said. 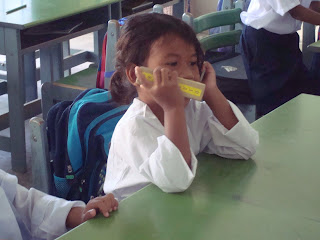 Once they heard their phone numbers been called by me, the leader of the group will count 1, 2, 3 and together they will make "ring" sound for three times. One member of the group will pick up the phone and talk to me....hahaha... we will have a bit of conversation and I will asked the number of the biscuits that they want and write it on the white board. Then I will call another group and asked another number. After that we learn how to add the two numbers together. After done with addition, I continue to phone another group. It is so much fun to do. Although it was a new thing and the pupils were so shy to talk at the first round but after a while the pupils enjoy it a lot. I let the pupils take turn to pick up the phone and talk to me...hahaha! 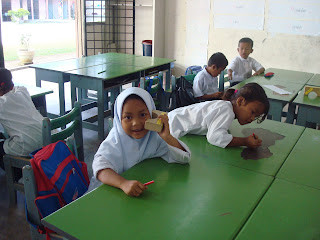 It was a bit blur for them for a while when I started the activity with them. But after they get how the activity runs, they can give well respond to me. Unlike the pupils in outside school, these pupils do not have many experiences in using the telephone, so it great to act it out with them... I'm so excited to talk to them on the phone...haha...luckily it were free calls. Oh, and I was a bit strict at the first time introduce the activity to them...sorry guys... ;)

Posted by apistakkisah at 2:56 pm
Labels: teaching and learning