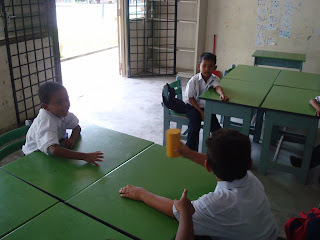 It's time to move to a new topic that is 3D shapes to year 1 pupils. i really excited to teach this topic because the resources to use is available around the school and accessible to the pupils. It is easy to find shapes around us and the make connection with the name of 3D shapes.


I am not expecting something much for my pupils to know the shapes and memorized the name yet. I believed they will need some time to remember the name of the 3D shapes especially the name was quite difficult to pronounce and sound too scientific for them. So, the main purpose is just to let them see the shapes, touch the shapes, hear the name and make simple connection with their surroundings. 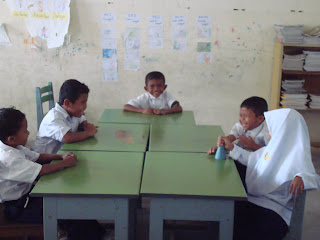 So, I begin the class with simple questions about shapes that the pupils know. Most of them give me answer of 2d shapes like triangle and rectangle. Then, I asked them whether they ever heard about 3D shape. They begin to silent. I just smile because I know they must not sure what is the thing I talked about. I can observed Farizan (a girl who always active talking) suddenly open her mouth but do not said anything and make a confuse face. I just keep smiling.

Then, I take out a pyramid from a box that I bring to class and again begin to ask them questions. No one can give the correct name of the pyramid but I was happy to hear some pupils keep trying to give the correct answer. Most of them said it is a triangle. I did not continue the class by telling the name yet but I give the shape to one of the pupil in front of me. I let her touch the pyramid and then pass to the other pupils. They keep passing the pyramid until all the pupils touch it and feel it themselves.

I do not know why the pupils were so excited to touch the pyramid actually. They were so happy talking in Temiar(about the pyramid I guess) and smiling when they get the opportunity to touch it. Suddenly when it came to a boy name Masyadi, he kiss the shape! haha...he just over excited I guess but the whole class was smiling to him.

After every pupils get the opportunity to touch it, then I told them the name. It is a PYRAMID. I let them repeat the name several times and then asked them to say it loud by group and individual. 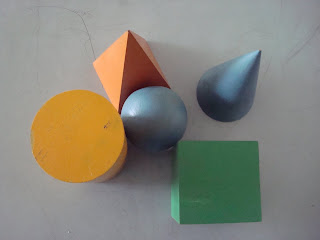 After a few times repeat the pronounciation, I begin to ask them the other things around them that look like a pyramid. So many hands had been put up to answer my questions. some said it is like nasi lemak (a famous food in Malaysia), some said like a tent and Razal suddenly stand up and said it is like a 'jelmol'. and this time I was the one who keep silent and confuse. He was standing with lots of confidence to tell his answer that I do not know what it is. I asked him what is 'jelmol' but he refuse to answer, smiling and hide his face behind the table. So, I let him be and asked Aisyah (a brilliant girl sit near to me) what is that mean. she said "jelmol" means mountain in Temiar language. I just smiling and said Razal had given a brilliant answer. We give him a clap and he begin to smile again.
Then, I had continued the class by repeating the same activity but using the other 3D shapes. It was a great day for me to teach this new topic. I think at least this activity open a bit views of 3D shapes to the pupils before I relly stressed about it in the future class.
p/s: I am planning to use clay in the next class.... :)

Posted by apistakkisah at 11:38 pm
Labels: teaching and learning