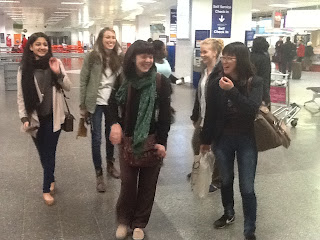 If you got a chance to change one thing from your past, what would you change?

The journey was good. Not much trouble at all except watching Uni and Farah getting through the security check. They were checked carefully because of some accessories that they wore I guess. I saw Farah was like dancing with the security because she was a bit ticklish! that was a bit of entertainment ;) aha...sorry Farah!

The view from the sky was amazing! desert, mountain, snow and the cloud made the view beautiful. Even though I fell asleep all the time, but still, I managed to watch the beautiful scenery as I got a seat next to the window! lucky me! beside me was a Ghanaian lady called Eva, who was coming back to Accra for a holiday with her family. Next to her, Kristina and her boyfriend. All the others were scattered all around the flight which meant no contact with them on the plane. Except Louise, actively walking here and there checking everybody ;) So good!

While I was sleeping because of being tired and not getting enough sleep yesterday, suddenly one of the stewardess woke me up. She handed me food. I was a bit surprised that she said I asked for muslim food during the booking. I totally had no idea and had forgotten about it. I also thought that I had missed my lunch as I was asleep and assumed that everybody else had eaten their food. So, who doesn't like food right? I finished eating in a second...and felt proud of it, when suddenly 15 minutes later, I saw the stewardess started to give the others their food...oopsss....I guess I was wrong! nobody had eaten anything yet and I was the only one who had eaten! I felt so bad! but it's not my fault though....aha

The plane landed at about 8:25 pm Ghana time. When the plane was near to landing it was a bit shaky. I guess the cloud was so thick and heavy and that was why. Once we jumped out from the plane, everybody started to talk about the heat. Yeah! its humid and hot! wooohooo...Ghana! Here we come!

The process of checking out from the airport took a bit longer than we expected. There were lots of people queuing to get the visa checked. I think the airport looked very simple and more humble than other airports that I have been to before. I got through the check point with no problem. And then we met the Omega Schools representatives and they took us to the Macbies Hotel. It feels so good to be in Ghana!

ps: I love hot weather :) woohooo!
Posted by apistakkisah at 4:25 am
Labels: experience