driving in the dark

I arrived in Sungai Siput around 7:00p.m tonight. Then, after a quick rest, I decided to go to school tonight. Iwill not be able to go to school tomorrow as I need to go to a seminar in Kuala Lumpur. My intention was to meet with few year 6 pupils and give some reminders and works for them to do during my leaving.

As I drive through the dark, luckily it still early around 8:30p.m, I can see a few motorcycles going out from the village. Actually, it is not adviseable to go in or out from school during night time. Just to prevent from any possibilities. But, I just do it! :D

As I arrived to the school gate, suddenly I saw my kids were gathering. So, I stopped my car to find out what happened. They told me that one boy was trying to run away from the hostel. He wanted to go back home tonight! 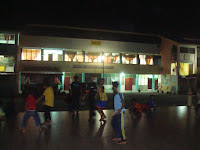 Oh no! Absolutely it was a terrible idea for him to go back now as his village situated up to the hills. In the dark, it will be difficult to go back. So, we were trying to convince him to stay only tonight until the sun comes out. But he refused and crying wanted to go back home.

One ustaz from the next islamic school found him and brought him to me. I do not really sure what to do. So, I just asked him a few questions. I even offered him to go out and stay with me for tonight but it does'nt work. He even cried louder...ooppsss....sorry! :D

At last, after a few more chat with him, we managed to get him stop crying. I cuddled and carried him to the room and let him have a shower and supper. Ustaz told me that if he still have a problem later, maybe he will bing him back home by his motorcycle.

So, right after that drama, I met with year 6 and give them some instructions for the whole week that I'm leaving. I just hope that the boy that wanted to run away will stay for the night and he will not run away in the middle of night! Don't think they will not do it OK! Maybe after a week of shool holidays, he found it's difficult to stay away from family...he just 7...

p/s: down look down to others...respect!
Posted by apistakkisah at 1:03 am
Labels: experience