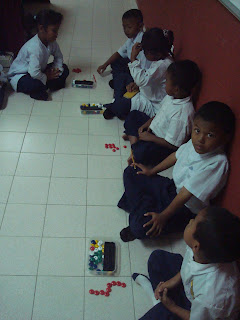 Today, I brought my year 1 pupils to the computer lab. We were doing subtraction activity using beads. Very simple activity where I said a number, they count the beads and arrange them on the floor. Then, I said out one more number and they subtract or take out the beads and put it back into the box.
What fascinated me today was not the pupil's learning experience on the subtraction. But, I was so interested to see the kids were so excited to arrange the beads on the floor. After they counted the beads, then, they started to arrange it to what they like. I can see that they tried not to arrange the beads similar to another group...hehehe...so cute! :D
Even when they take turn, they tried to work in pair to arrange the beads as what they like. I love see they discuss even in Temiar language. And even they focus on the arrangement of the beads more than the subtraction itself! Ahaha...I think it's fine as long as we as teacher alert about it and emphasized on the main objective of the learning...
p/s: it's time to push the button1
Posted by apistakkisah at 10:20 pm
Labels: teaching and learning