subtracting and painting? any similarities? :D

Last Friday, I brought my year 1 pupils to the "not ready yet" Math Lab. We still learning on subtraction numbers below 10. 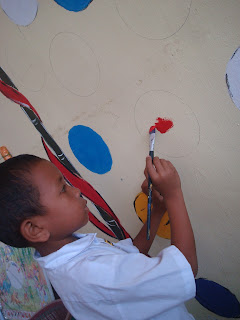 I let the pupils used the beads to subtract the numbers that I wrote on the white board. Then, I continued the lesson by giving them a few questions in the exercise book.

While busy helping some kids to understand and do the exercise, Aidil suddenly asked me about the circles on the wall that already there but still not finish to be paint. Yeah, his correct. It is still not finish yet. I need some more time to do it as the wall is quite big.
His question makes me think that I can used it as a reward to them. I think they will love to colour the circle too. So I promoted to them that who ever can finish and do the subtraction correctly will get a chance to paint the circle.

I think it quite successful. The advanced learners of course can do it correctly and the slow learners, even though some of them doing something that I can't really understand but at least they were trying hard to finish the work given.

At the end, I decided that all the kids will get the chance to paint the wall. I just feel really guilty to not let them doing it. Especially after some pupils doing it, I can see some pupils that did not get the chance started to say something to each other. So, I called them one by one and let them do it (while I'm praying in my heart that they will not make the wall dirty...wahaha)

I think we have fun doing subtraction and paint the wall!

p/s: feel like everybody can hear my loud voice while teaching since the Math lab is situated in front of the office! wahahaha...
Posted by apistakkisah at 9:52 pm
Labels: teaching and learning