so the drama continues...

After what happened in year 6B yesterday, I thought it's going to end and the kids will be fine, motivated and be prepared for next week.

I do not have the class with them today. But as their class teacher, I will go to the class every morning to check the attendance. There's nothing unusal this morning. They look fine to me. So, after that I went out to the next class, 6A.

While I was heading to the computer lab, planning to pack my things and prepare for the teacher's meeting later, suddenly I heard the voices keep calling my name. I looked at to the source and it's coming from my pupils in year 6B. I just smile and wave them because I thought that what they were doing. I just keep walking then.

After a few seconds, I heard foot steps coming towards me, chasing me. As I turn back, it were two of my year 6 girld, Baizura and Atikah, holding something on their hands. It was cards. Both of them. They said it were from all of the pupils for me to read.I take it and just keep it in my book as I thought it were Hari Raya cards. 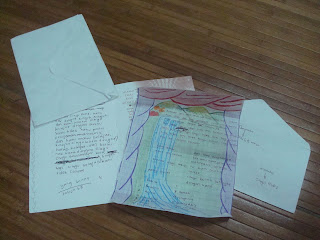 When I was in the car ready to go back home that afternoon, suddenly I realized that I don't read the cards yet. So I took it out from my book and started to read it! OMG! It were not just a simple cards, it's like a letter from all of them worrying about next week and about the future, failure and motivation. I feel like crying... They even said that they were so sorry for not getteing what they learn even though they try hard. They said they are so sorry if they not going to make it :(

I never expect that the letter will be so touched! And more than that it came from my year 6B pupils. They were so concern about it and I am so proud of them. Oh...my pupils, I wish I can help you more and more and more and give everything that I have. But, as I told you, we just can try, work for it, and whatever happen in the future we need to accept it ... Let's try the best that you can :)

I will meet them tomorrow, I hope to talk to them, make them feel better and dont really worry about it... I wish I can give more...

p/s: I want them to list out all the negative things that they have in their mind, write it on paper, crash it and throw it in the bin! We don't need that at the moment!

Posted by apistakkisah at 7:08 pm
Labels: teaching and learning