yay! for your learning!

I went to year 1 class in afternoon today to replace my friend because she had to attend a meeting. I think it was a good time for me to enter my year 1 class as we have some work that still some of my pupils struggling to finish it. It was writing numbers from 1 to 100. So, I decided to go to the class and make my pupils finish the work.

It was not a difficult task for some pupils like Intan, Syamsera and Razwan because they are very good in writing and understanding numbers. But for others, it still a big problem for them. So, I pasted a number chart on the wall for the pupils to look at and to copy on a pice of paper (with small squares).dgdsgdsds

So everybody was busy doing their work filling the square with numbers correctly while looking at the poster. I was sitting in my place waiting for the kids that having difficulties to come and check their work with me.

Suddenly, Nasrullah came to me to quietly and do the work in front of me. He not saying much thing but so focus trying his best to do the work. Once a while he will see me and smiling and then try to continue his work. I do helped him everytime he do some mistakes like skipping numbers. 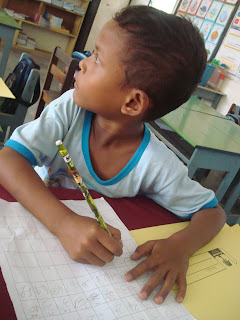 He looks very very focus and so into the work. I can see how much he learnt and change from the first month when he was in class. Right now, he can already identify the numbers and when u say out the number he can write it out correctly, which mean that is a huge achievement.

However, I do noticed that he got his own way of writing the numbers. I know that you guys must know that we always said that to write a number correctly, you must follow the rules. For example, if you want to write number 2, you must write it from up to bottom. But Nasrullah did it in his own way but at the end he got the same shape. So what should I do? After he got the achievement, should I just suddenly said he was wrong?

I refused to think that and I choose to accept his way of writing. As long as he get to write the number correctly, I will accept it. I know for some people they will not agree with this statement but I have my own reason. When you do problem solving questions in mathematics, you always said that you can do any type of way to solve the problem as long as you get the answer. I think it can apply to writing the numbers too :P

Plus, I know that kids have their own development and we can correct them later. I don't like to dissappoint my kids when they just started to like doing the things. As long as when you teach, you already emphasised the rules to them, whatever way the want to do to get to the answer should be their choice... let be a supporter rather than making them hinder from learning.... 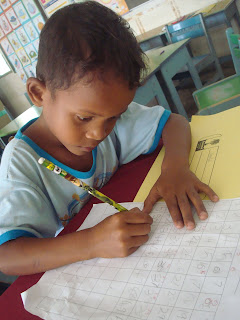 Posted by apistakkisah at 8:49 pm
Labels: teaching and learning