learn how to write your name! Upgrade Version! 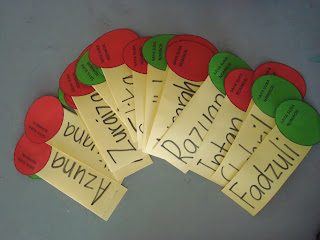 The same problem of knowing to write the name appeared to this year 1pupils. So, as what I do to last year group, I implement the same activity but witha bit of upgrade. Yeh, dont think that only iphone can be upgrade ... this activity also can be upgraded...haha 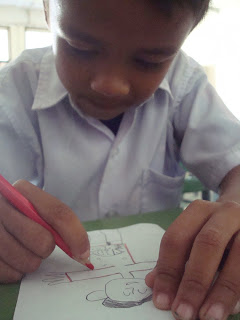 I gave the pupils small plain paper and asked them to draw their own face. It was so good to give this ooportunity for them because you can see how's the pupils think about themselve. I can observed that some of the pupils were so confidence to draw their face and colour it beautifully and also some pupils that were a bit scared and not comfortable to write draw their ownself.

One pupil that really attracted me was akin when he draw himself at the corner of the small paper, so small compared to other pupils and but it was a cute drawing. I do not know what is ih his mind but I believed akin is developing his courage and confidence towards the time now. And Akin, don't worry... You will be fine ;) 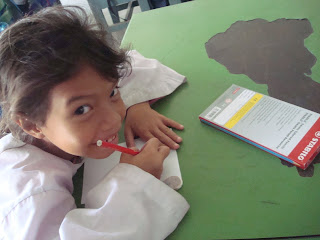 So, the upgrae version is that I put a small round shape beside their name which they need to write down their favourite number from 1 to 9. My concern is to put a bit of mathematical element in this activity so that pupils still connect with some Mathematics in this class. All the pupils that finished to draw and colour their face will come in front of me and take their name and then write their favourite number in front of me. I want to see how they write ot down so that I can check it out! 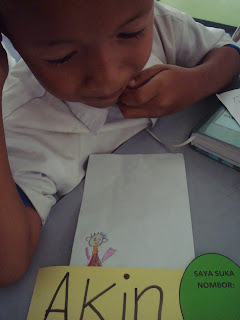 As the objective of this activity are more into helping the pupils to know to write their name, I think it helps them a lot. When they draw their own picture, they will remember more than if I printed their picture. So, later when T paste the name on the wall they will not having problem to find their name on the wall. It will take time for a while to remember every letters to develop their name but time by time they will remember it! I to tally confidence because I do it already last year! (check out last year entry: learn to write your name) 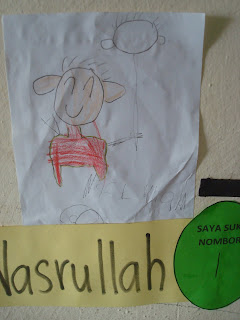 After everybody finished with drawing, write their favourite numbers, glue the picture and the name togethr, we pasted it out on the wall. Later, it will help my pupils a lot ;) 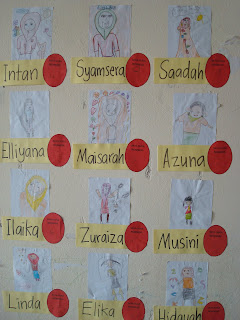 p/s: looking down to earth...
Posted by apistakkisah at 8:40 pm
Labels: teaching and learning