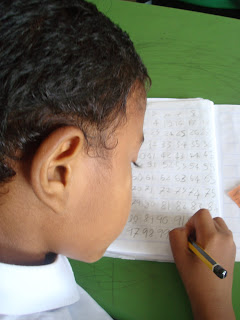 I had finished teaching all the topics in Mathematics for my year 1 pupils. They already sit their final examination. Yusri and Armin had performed very well while Aisyah and Faziah also showed a good understanding in answering the questions. Some of the pupils were average in understanding and some of them were still confuse with numbers. I had to accept that I do not have much time to help these kids actually this year because we only have a few more weeks to go now. I really wish I have more time for them.

This few days, I had emphasized my year 1 pupils with their ability to write numbers correctly. I really believed that year 1 is the important foundation to learn to write numbers well and correct. I want my pupils to develop confidence in writing the numbers, avoid from doing mistakes and misunderstanding especially when it comes to the numbers that have more than one place value. They need a lot of exercises in this.

So, I had asked them to write numbers from 1 to 100. Everyone needs to do it on their own on the square paper. The highest learners will do it without so much problems but i want them to strengthen their ability. I also want them to learn to write the number properly. For example Aisyah, she can write the numbers well but her written is quite messy. so, I told her to learn to write it neat and tidy. 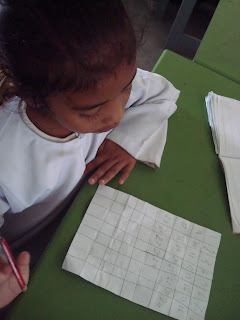 For the intermediate pupils, they sometimes have difficulties to remember the arrangement of numbers. I believed that by doing this activity a lot, they will remember more about it. They will gain much more experience. I will go to observe these pupils because they need to be correct as fast as I can before they start make lots of mistakes. Like Wani, she always get confuse to write 21 and 12. She sometimes get confused about this numbers. I get a better chance to correct her when I do this activity. She looks more confidence now at least.

Other than that, I also let my pupils to do some movements before they started to write it down. We claps our hands while counting the numbers in 10 and then do some simple dance. We change the movement every 10. It was so great to see everybody involves in it.

I hope that they will not struggle much to learn numbers next year. they will learn more numbers for sure and more place value to come to be learn in the future. I wish I still can teach them next year but I had already been told that I will teach a new batch of year 1 and two classes of year 6 next year. Sounds like a huge responsibility are waiting for me next year!

p/s: Happy to see year 1 this year looks happy in their first year of schooling! Stay the same pupils :)

Posted by apistakkisah at 7:50 pm
Labels: teaching and learning