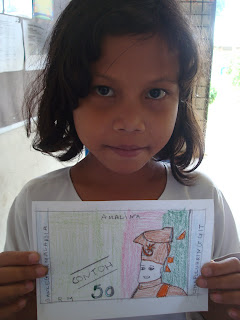 Starting this week, my year 1 pupils will start to focus on learning new topic which is Money. Although I had introduced to them about money before but this time they will learn about it deeply. I started the class for this week by doing a simple exploration on the things that they will find on the Malaysian's notes.

I begin the class by discussing about the Malaysian's notes which were RM1, RM5, RM 10, RM 50 and RM 100. I asked them simple questions like the similarities and the differences that they can find from all the notes. I also asked them about the numbers that appears in each notes so that they can aware about the value of the notes too.

After that, I divided the pupils into group of 5. Then, I gave each of the group a fake money with different value from RM 1, RM5, RM 10, RM 50 and RM 100. I also provided them with a small plain paper. I asked them to discuss in their group about the features in the notes that their group got by drawing it on the paper. They need to discover what are the important things that they need to remember on the notes given to them. 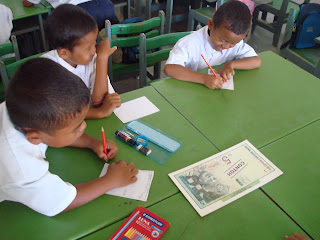 Observing my pupils try to draw the money as good as they can, it makes me happy. I can see that they try to make sure that they did not forget to draw important features of the notes given to them. Some of them will tell their friends if they found that their friends doing mistakes on the drawing or forget something. I just let them do by their own and sometimes I just tell them to make sure that they do not forget to write the number clearly. It represent the value of the money. The other important thing is that the colour of the notes given to them need to be memorized so that they will not confuse on the value of the money.

Actually, by doing this activity, I believed that it will make my pupils become aware of the features in the notes. They will be more sensitive towards what should appear in a notes of Malaysian's currency. 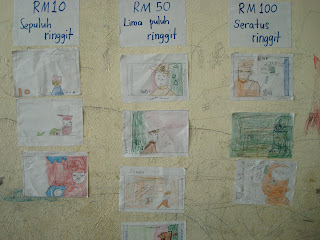 After that, I let the pupils paste their work on the wall so that everyone in class can share their work. Most of all, the pupils in the different group also can see the features of the money in other notes. Tomorrow, I will do another activity which is quite similar but using the coins.

p/s: Should I worry or not to worry about my future? hm...
Posted by apistakkisah at 6:49 pm
Labels: teaching and learning