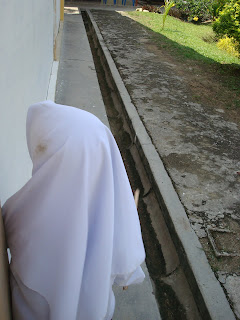 Young kids' imagination are so amazing. To be a teacher means to celebrate pupils' imagination not to brought it down. Today, after finished to teach Mathematics to year 3, I walked out to head to the Teacher's room. Suddenly at the corner of the building, I met with a year 1 girl holding a stick on her hand. She did not realized at all that I was standing right behind her. So, I choose to be quiet and observed what she is doing there alone with the stick on her hand. I saw she moved her hand while saying something. I cannot really understand what she said because she just like whispering in Temiar language mixed with Malay language. But I knew what she was doing. She was acting like a teacher who is giving an advices to her student. I smile to myself seeing what she was doing. She was so focus to what she was doing until she did not realized at all that I was taking her pictures. Maybe she tried to control her friends in the class before but they ignored her so she decided to act it out all by herself at the corner of the building. So cute!

After a few minutes, some of her friends observed what I was doing. They came to me and she realized because they make noisy. I hide my camera as fast as I can so that she will not know that I was already there observing her behavior. She saw me and give her cute smile. I just smile back to her without asking her any questions. I do not want to make her feel shy. she just ran back into the class....

A few weeks ago, I entered Year 4 class to teach Living skills. After doing some activity I gave a note for the pupils to write in their Note's book. Then, I walked around the class to observed my pupils doing the work given to them. Suddenly, I saw a boy was busy with his small book. I do not interrupt him. I just took his book and see what he is doing. He was drawing a car! I did not nad at him because he is doing something. Although he did not doing what I asked him, at least he was focusing on something. Actually, he did not really know how to read and write. That is why he do what he wanted to do. I told him to continue his work after I found that his book is full of drawings. And it was a nice drawings with colours! He is so talented and draw using his imaginations. 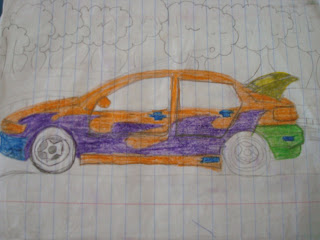 I believed that although these Temiar kids found that it is so difficult to them to learn in formal class, they still children with lots of imagination and creativity. We just need to encourage them to their ability and their interest so that they will feel accepted and happy to be in the school. We cannot 100% judge our pupils on their ability to answer examinations. Its better to celebrate their abilities and creativity!

Arden, P stated in his book 'whatever you think, think the opposite' - "Good marks will not secure you an interesting life. Your imagination will" pg. 115 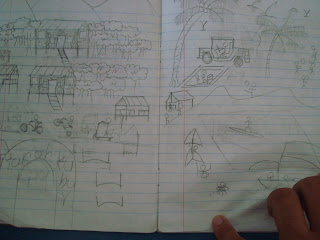