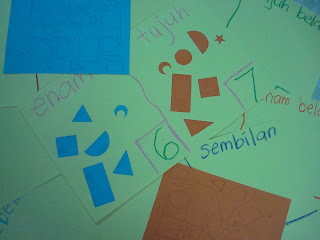 I think that my year 1 pupils now were ready to be introduced with the group work in learning mathematics. I do put these pupils to sit in group of 5 before but did not really give them a task that they need to finish it up in group. so, after 5 months teaching them, I believed that they are ready to get involved in group activity and ready to work together among themselves. This is because, I can see that their attitude now change compared to their attitude in the first month they were in school. If before some of them were so shy until they do not want to talk or walk in the class, now I can see some smiley faces running in the class...If before some of them were so scared to open their mouth to say out numbers, now I can observed that they do movements while singing mathematics songs... Their attitude shows that they are ready for more approach...

The activity was so simple but need a little preparation and planning before the lesson begins. The objective of the activity is to count from 11 to 20 (I use lots of Malay language in introducing numbers to them to avoid confusion). I had prepared a board with numbers on it (in words), a piece of paper with lots of shapes on it, glue and scissors. To complete the activity, pupils need to cut out the shapes and paste it on the board according to the number written on the board. 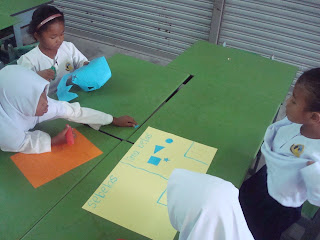 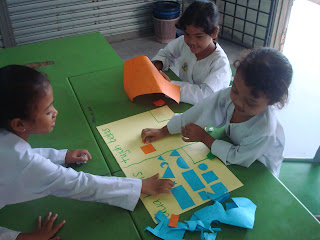 I had pointed different task for each of the pupils in each group. 2 pupils will cut out the paper, one will paste it on the board and the other will count the shapes and make sure that it is correct. Then, I encouraged them to switch on their position so that every pupils have chance to do different activity and no pupils will conquer the activity by himself.

I was quite surprised that my pupils can work together in their first group work task. yeah, I know that at some moment I need to be strict to them to control their behaviour but most of all they can show that they can communicate with each other well to complete the task although they prefer to communicate in Temiar language that I cannot understand at all now except few simple words. But for me when they can complete the task together and help each other that shows a great situation in learning mathematics. 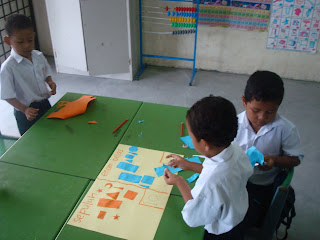 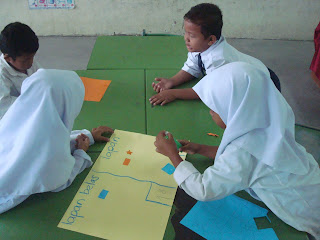 During the activity, I do not let the pupils to compete with one group to another group yet because I want to avoid sad feelings among the children. yeah, they are so new to the group work and I think that if i let them compete, the last group that finish the task will feel down and will found that the group work is not interesting. So, I reminded myself to avoid the pupils from competing with each other. I change it to the way that every group must finish the work with neat, tidy and beautiful poster. I found that this way is more positive in introducing group work.

After all the group finish their work, I write down their name on the board and paste their work on the wall. I believed that every pupils in the class will feel proud with it and that will make them happy. Most important, I believed that the group work activity can help them to learn counting from 11 to 20 ;) 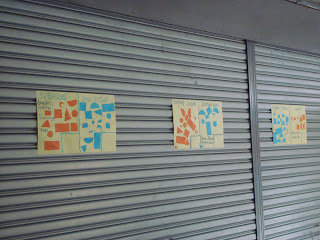