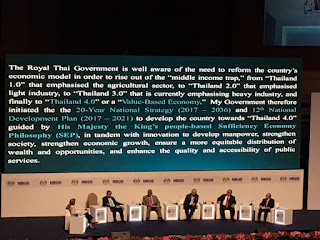 It's almost the end of our first academic module - Public Economic Management. I found tht some parts of the class are quite hard to absorb. Especially when introduced to economic terms. Anyway, you just need to learn what you need to learn.

Last week, we were invited to attend international events in Putrajaya. The first was the International Conference on Blue Ocean Strategy (ICBOS) and the second was Commonwealth Association for Public Administration and Management. 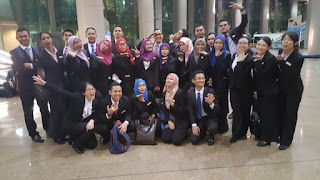 I felt lucky to be there and happy to be able to learn some new things. During the ICBOS, I was able to listen to some insights on the Blue Ocean Strategy in Malaysia given by the PM himself. I also listened to some explanations from world leaders from Nauru, Swaziland and Thailand. We were there for 2 days, so there were many more lectures and workshops. The discussion were organised around the theme of "Transforming the nation through creativity and innovation".

For the CAPAM event, we were there during the opening ceremony, the closing ceremony and the President's dinner. I was amazed by Patricia Scotland - the Secretary General of the Commonwealth speech. She talked on the matter of innovation in public sector as well as workinv together among the countries in the commonwealth.

The most important tjing is to absorb as much information as you can and also to enjoy the event with colleagues and meeting new people.

Okay. Now back to worrying about the final group presentation for the economy subject and exam coming in 2 days time! Wish me luck!