just a bit about them... 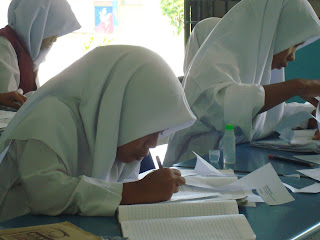 Few months ago, early in January when I just got to know that I will teach year 1 and year 6 for this year, I do said that it will be a huge challenge for me. Now, its already May and yes! it is a really huge huge challenge!

I did not write much about year 6 before this because I just feel a bit awkward to write down what I'm doing with them. I really admit that I do not have so much experience in teaching this pupils in order to make them prepare for the UPSR examination in September.

I try as much as I can to give them as much as preparation that they need before the examination come. Yeah, it's a bit stress for me sometimes to think about their performance because people just want to see the result rather than see the progress that they achieved and even worse they maybe forget about all the things that we did when we were in school.

When it comes to my pupils, I also feel so sad to them sometimes. I can see some of them trying so hard to learn in the class and give so much effort to get to do the mathematics correctly but sometimes it just too complicated for them. I really appreciate their effort but still I'm so sad if later, they not get a good result, their potential, their attitude, their effort will just be forgotten and people just want to know the good result only.... :(

For all the pupils in year 6 that really try and work so hard everyday, just keep the good attitude and do not give up. Keep pushing yourself because it's the only way to get to the top. It's fine....it will be fine... I always pray for you guys k... ;)
Whatever happen, I always told my pupils to not thinking much about their result in examination but just try as best as theyr can. I told them that to be a successful person, we do not need to get the very best good result. And future will never been predicted by anyone. The most important thing is that the attitude, the spirit and the positive mind to think that they always can and no one cannot stop them from be successful in life! ;)

p/s: even though i'm not really a fan of examination thing but because it's the reality, let's just accept it and try the best to help them ;) (just trying to think positive...hehe)
Posted by apistakkisah at 6:20 pm
Labels: reflection