Happy New Year 2011 to all :) Ok, stop talking about new year for a while. I was in the mood to talk about my plan in this new year actually but suddenly something happened to me a few hours before that makes my mood change! and now its a bit of angry plus sad plus dissappointed plus upset!


I was driving to Perak this afternnon. I was so happy and glad to think about the first day of the school tomorow (not thinking about the work that I did not do yet :P ). While listening to the radio and follow to sing the song played slowly (not really slow actually) I keep focus my eyes to the road. Try to drive safely...


Suddenly, when I passed by Taiping I heard noises came from the back. It were so loud. OMG! So many motorcycles behind me. They not the usual motorcyclists but they are "Mat Rempit" = people like to do dangerous skills on the road on their motorcycle. The problem is that the road is so busy with cars but they ignored it and still want to show off on the road. I can't believed my eyes to see how rude they are. They not respect the other road users at all! What did they think? They don't have mind to think? Do you think people really respect you by seeing your Superman skills on that motorcycle? Egh... (want to vomit now)


I think they did not feel grateful with the life that they have. They did not even think that many people do many things to get their life back but these people just want to waste their only one life on the road. Yeah, maybe nothing happened to them this afternoon but how about if they fell on the road for real. The problem is that they not just risking their life but also will involved the other road users.


Although I know that it is not appropriate for me to take the picture of them while driving, but because of not only one motorcycle but quite a few like 6 to 10 motorcycles passed by my car with that action, I slow down my car and snap a picture so that I have a prove of their attitude! hahaha...dont try this at home (same to what I did - use the camera while driving-dont try this at home too-) 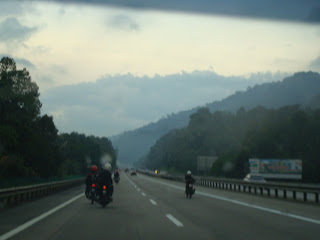 It's only 2 days of 2011 and I already see this again. Egh...please respect other people life if you don't want to appreciate your life. Don't let other peoples lost their precious life just because of your rude behaviour. You only have one life...let's appreciate it!

Tomorow the school will start again. Welcome to second year of teaching :) really hope it will bring happiness and joy. I'm so excited to see my pupils and excited to wear new outfit...hahaha... but still don't like to think about the filing things. egh...really need to learn to do that! Go Apis! Let's start tomorow with great feelings!

p/s: What happened to the Mathematics Tools Kit that I gave to year 5 pupils last year let's find out :P