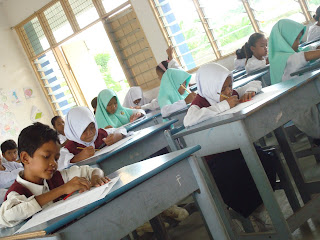 Today is the first day for the examination week start! I am so nervous to see my pupils achievements in mathematics. I did not put a high expectation but I do want to see some of the pupils can at least perform well in their mathematics paper especially to year 5 pupils because next year they will be in year 6. I need to accept the ability of my Temiar pupils.

I do observed my pupils behaviour during the examination today. I can see a little bit of change of the attitude now. Some think seriously and make concern of my advices. If you still remember, i had make an answering questions campaign before to make all the pupils try to do something with the questions given. I think it help a little bit. I can see that mosty of the pupils write something on each of the questions. That is better than just sent back a plain paper!

I also had a chat with some year 3 pupils regarding their ambition. Most of them still scared to say that they want to be a successful person in the future. Most of them still said that they want to be just as same as what their parents do now. I want them to be brave! I do not like to hear they give up before they try it first. I hope they will realize this as soon as possible.

I hope all the pupils had prepared themselves to face the examination week! Good luck to all of you and may successful will always be there! Good luck!