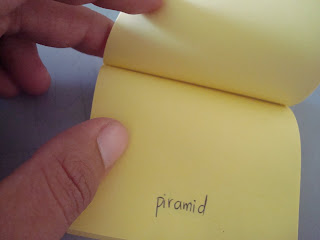 Just about 15 minutes before enter the year 1 class, suddenly I got an idea to strengthen my pupils with the ability to remember the name of 3D shapes. I was sitting on a chair doing some work at that time and had see sticky note on the table. The idea just came in after that. 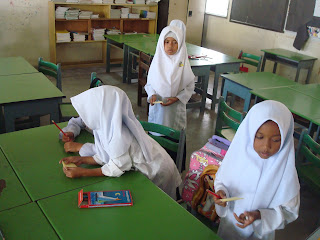 First, I write down one 3D shapes on the sticky note. Then, I gave it one pupils each. The pupils will need to read the name of the shapes written. After that, they need to draw the shapes on the paper (we had draw the shape in the previous class, so this time is like reflect what they had done before). I also had put down the 3D models in front of the class so that the pupils can get the picture of the shapes in their mind. They need to colour it and then paste the stick note on the wall according to the shapes that they draw. 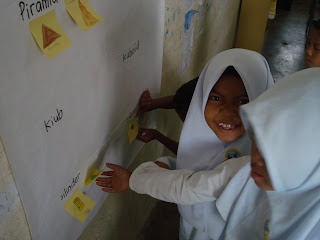 The class turn into active while doing this activity. I was quite amazed because the idea just came to my mind just a few minutes before enter the class. I believed that sometimes we do not have to think so hard when we want to do something good. Sometimes the simple things can give huge impact too. Just used materials around you and available to you but just need to be creative to make it relevant and meaningful to be use in the class. 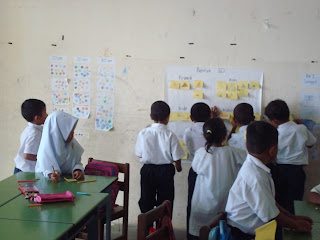 I am proud with my year 1 pupils now with their ability to remember the 3D shapes name. Most of them can pronounce it well when they been asked what they had learn. Although they have difficulties in spelling it, but be able to pronounce it correctly is also a good thing for my Temiar pupils. 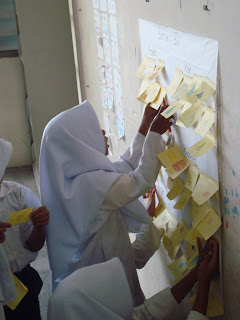 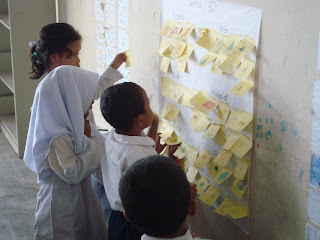 I met with the remedial class teacher and have a chat with her. She asked me hat topic did I teach now. Before I answered to her, she already told that she know it is about 3D shapes. She said that she knew it from the pupils that came to her class. I was so happy to listen to what she said. She told me that Romzi can said 'sylinder', Shukri can tell about "pyramid". That is so great to know. The slow learners pupils also can said it correctly now. :) 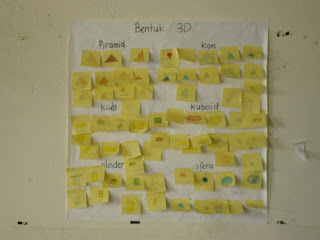 p/s: sometimes I just keep smiling when I remember about how the pupils acted in the class...haha...
Posted by apistakkisah at 5:12 pm
Labels: teaching and learning