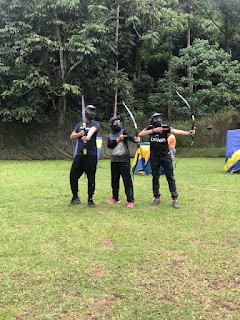 I have just returned from a refreshing 3 days and 2 nights team building activity. It was an amazing experience and I was so lucky to be able to attend the pogramme. I was not sure I could attend the programme at first, because there were another programme at the same time. Then when it was cancelled, I had the opportunity! 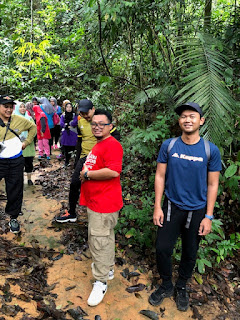 The programme was organised by the department I am working at now - Procurement and Asset Management Department of the Ministry of Education. There were about 28 participants which was quite small, I think. But small is good sometimes, small means personal and I enjoy personal. The programme was held in Hulu Langat - Pusat Kokurikulum Jabatan Pendidikan Negeri Selangor.
Just a review some of the activities:
1. wall climbing - this was my first experience to try this activity. I always look forward to trying new things like this. I think less about nervous but more about excited. Climbing the wall needs precision and body strength. It looks easy from standing on the ground but difficult when you start to climb. I really enjoyed it when I started to be able to move up step by step, up and up I go. The feeling of accomplishment started from the start of the climb! Love it! 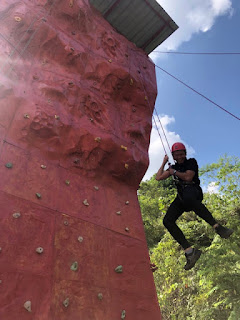 2. kayaking - never say never to kayaking! just to know there will be a kayaking activity makes me happy to join the programme. Even though the pond that we used to paddle the kayak was quite small due to the fact that the centre is mainly for school students. But I had my time! Just enjoying the moment!
3. jungle trekking - the night before we went for jungle trekking, it rained heavily. So you can already expect the structure of the hills. The journey started at about 9 am after an intense aerobic activity. I think this activity is the most tiring of all but the most achieving to teach people to be patient. We walked and climbed one by one patiently supporting one another. I think it was also the activity that got people screaming a lot because of the leeches.
4. survival (cooking) - right after we came down from jungle trekking, we stated to divide into groups and were instructed to cook chicken and fish in bamboo for survival. The recipe is quite simple where you just cook chicken and fish with some herbs and salt. 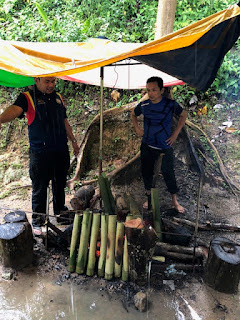 5. archery game - this was the most memorable and enjoying experience for everyone I think. In the late afternoon, we were thought about bow and arrow. We were given a chance to practise using the bow and arrow beacuse we will play a game the next day.
Come the next day, in a group of three, the game was played in a league. The game was really interesting because you need to score points by shooting the board and also shooting the other players from the different groups in 2 minutes. As per usual, I am not so good at shooting but I enjoyed the game very much. I think it was also enjoyable because everyone was playing for fun and less for competition.
Overall, the programme was successful to get people to know and learn about one another in the department. I also think that this kind of programme needs to be done to get people together outside of the office environment! Less work, less stress, more focus, more output.
PS: feeling like Hunger Games while playing the archery game! 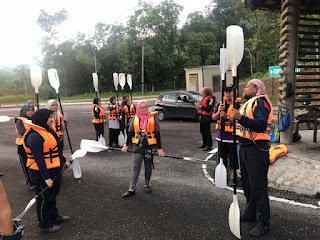