Oh oh...it's already the second week of 2011 school day. I did not tell anything about the new pupils in year 1 yet. :D hehehe...you really need to come and see these pupils. They are so cute and so nice! hahaha...

So, as usual year 1 pupils will need some time to feel really comfortable in the class. I can see some of them are still nervous. you can see it when u see their eyes. Someof them still having difficulties to understand malay language. However there were also some pupils that looks so comfortable and so brave in the class especially to those who were dong pre-school in this school before. They know me a little bit as I always go to pre school class last year.

They already introduced themselves to me in the previous class, and I also had do the same. So, today I started to teach a bit today. I'm not going to be too serious yet because I don't want them to get shocked with mathematics so I decided to just start the teaching and learning today with play and fun activities. (I think it's fun...hehe) 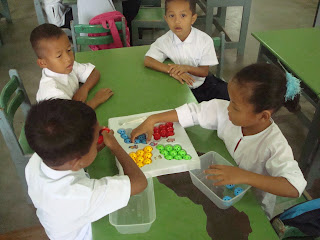 My aim for today is more on to see the knowledge on numbers to all of these year 1 pupils. I wanted to get a picture of their knowledge on Mathematicsso that in the next class I know where to start.

I give the pupils the colourful balls (green, yellow, red and blue) and two empty boxes. I put them in group so that it will be easier for me to observe them. i just wanted to see thse pupils can understand my instructions or not. I asked them to put the balls in the boxes using the words "more than" and "less than". One box will only contain one colour ball in it but the quatity is depends on the pupils. For example, " Can you show me the red balls "more than" the yellow balls?

I observed that some pupils really can understand what I asked them to do. But a lot of them still have difficulties. More than that, the pupils that can understand also can answer my questions when I approached their group. So impressing! Intan, can even do it without any mistakes at all. :D What a good start! :D

After finish this activity, I teach a number song to them. The song is about counting the fingers from 1 to ten. I make the lyrics myself but I use the melody from an old song (P. Ramlee's song called tanya sama hati). i think they like it ...